Welcome to Photon update #4! [Yes, another update this week. I’ve caught up with the backlog, so these updates should now reflect recent work over the last 7-10 days.]

Let’s first talk about a couple of projects that overlap with Photon and have led to some questions about how things fit together.

So, hey, are these separate projects? Are we duplicating effort? The answer is “no” to both.

Quantum Flow started off with an emphasis on platform bugs, since web content performance is, y’know, a pretty important consideration for a web browser. The Photon project got rolling well after Quantum Flow had begun, and is simply the front-end complement to Quantum Flow’s performance investigations. The two projects are basically just different views into the same underlying work, and are coordinating very closely.

The main focus of Quantum and Photon is Desktop Firefox. However, the mobile team will be doing a visual refresh of Firefox on iOS and Android to fit in with the new Photon design. They’ll be updating iconography and colors, as well as making the page loading indicators, menus, toolbars, and tab tray more consistent across iOS and Android. It’s also worth noting that Firefox on Android will still benefit from some of the Quantum improvements, since it’s also built on top of Gecko (on iOS we use WebKit, due to Apple’s platform restrictions).

Let’s get straight to it.

That’s it for now. More next time!

That’s right! Time for another Photon Engineering Newsletter! (As I gradually catch up with real-time, this update covers through about May 16th).

May got off to a busy start for the Photon team. As I mentioned in last week’s update, the team has largely shifted from the planning to implementation, so visible changes are starting to come quickly.

A particularly big event was the Photon team gathering in Mozilla’s Toronto office for a work week. About 50 people from Engineering, UX, User Research, and Program Management gathered, from all over the world, with a focus on building Photon. Mozilla operates really well with distributed/remote teams, but periodically getting together to do things face-to-face is super useful to work through issues more quickly.

It was really terrific to see so many people coming together to hack on Photon. We got a lot done (more on that below), saw some great demos, and the energy was high. And of course, no workweek is complete without UX creating some fun posters: 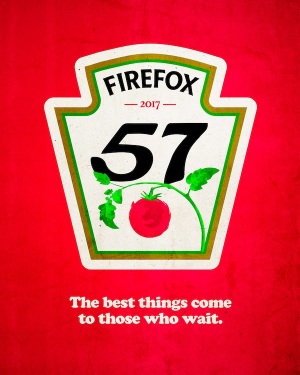 One important milestone reached during the week was setting the initial scope for what’s going to be included in Photon (or, more bluntly, what’s NOT going to be part of Photon when it ships in Firefox 57). We’re still refining estimates, but it looks like all the major worked planned for Photon can be accomplished. Most things placed in the “reserve backlog” (meaning we’ll do it if there’s extra time left, but we’re not committing to do them) are minor or nice-to-have things.

This is probably a good spot to talk a little more about our schedule. Firefox 57 is the release that Quantum and Photon are targeting. It’s scheduled to ship on November 14th, but there are important milestones before then… September 22nd is when 57 enters Beta, after that point it’s increasingly hard to make changes (because we don’t want to destabilize Firefox right before it ships). August 7th is when Nightly becomes version 57. This is also our target date to be complete with “major work” for Photon. This might seem a little surprising, but it’s due to the recent process change that removed Aurora. Under the old release schedule, August 7th is when Nightly-57 uplifted to Aurora (beginning ~12 weeks of stabilization before release). We want to keep the same amount of stabilization time (for a project as big as Photon there is _always_ fallout and followup work), so we kept the same calendar date for Photon’s target. This doesn’t mean we’ll be “done” on August 7th, just that the focus will be shifting from implementing features to fixing bugs, improving quality, and final polish.

And now for the part you’ve all been waiting for, the recent changes!

Well, hello there. Let’s talk about the state of Photon, the upcoming Firefox UI refresh! You’ve likely seen Ehsan’s weekly Quantum Flow updates. They’re a great summary of the Quantum Flow work, so I’m just going to copy the format for Photon too. In this update I’ll briefly cover some of the notable work that’s happened up through the beginning of May. I hope to do future updates on a weekly basis.

Our story so far

Up until recently, the Photon work hasn’t been very user-visible. It’s been lots of planning, discussion, research, prototypes, and foundational work. But now we’re at the point where we’re getting into full-speed implementation, and you’ll start to see things changing.

Photon is landing incrementally between now and Firefox 57. It’s enabled by default on Nightly, so you won’t need to enable any special settings. (Some pieces may be temporarily disabled-by-default until we get them up to a Nightly level of quality, but we’ll enable them when they’re ready for testing.) This allows us to get as much testing as possible, even in versions that ultimately won’t ship with Photon. But it does mean that Nightly users will only gradually see Photon changes arriving, instead of a big splash with everything arriving at once.

For Photon work that lands on Nightly-55 or Nightly-56, we’ll be disabling almost all Photon-specific changes once those versions are out of Nightly. In other words, Beta-55 and Beta-56 (and of course the final release versions, Firefox-55 and Firefox-56). That’s not where we’re actively developing or fixing bugs – so if you want to try out Photon as it’s being built, you should stick with Nightly. Users on Beta or Release won’t see Photon until 57 starts to ship on those channels later this year.

The Photon work is split into 6 main areas (which is also how the teams implementing it are organized). These are, briefly:

2. Animation – Adds animation to toolbar button actions, and improves animations/transitions of other UI elements (like tabs and menus).

3. Preferences – Reorganizes the Firefox preferences UI to improve organization and adds the ability to search.

4. Visual redesign – This is a collection of other visual changes for Photon. Updating icons, changing toolbar buttons, adapting UI size when using touchscreens, and many other general UI refinements.

5. Onboarding – An important part of the Photon experience is helping new users understand what’s great about Firefox, and showing existing users what’s new and different in 57.

These updates are going to focus more on the work that’s landing and less on the process that got it there. To start getting caught up, here’s a summary of what’s happened so far in each of the project areas though early May…

Menus/structure: Work is underway to implement the new menus. It’s currently behind a pref until we have enough implemented to turn them on without making Nightly awkward to use. In bug 1355331 we briefly moved the sidebar to the right side of the window instead of the left. But we’ve since decided that we’re only going to provide a preference to allow putting it on the right, and it will remain on the left by default.

Animation: In bug 1352069 we consolidated some existing preferences into a single new toolkit.cosmeticAnimations.enabled preference, to make it easy to disable non-essential animations for performance or accessibility reasons. Bugs 1345315 and 1356655 reduced jank in the tab opening/closing animations. The UX team is finalizing the new animations that will be used in Photon, and the engineering team has build prototypes for how to implement them in a way that performs well.

Preferences: Earlier in the year, we worked with a group of students at Michigan State University to reorganize Firefox’s preferences and add a search function (bug 1324168). We’re now completing some final work, preparing for a second revision, and adding some new UI for performance settings. While this is now considered part of Photon, it was originally scheduled to land in Firefox 55 or 56, and so will ship before the rest of Photon.

Visual redesign:  Bug 1347543 landed a major change to the icons in Firefox’s UI. Previously the icons were simple PNG bitmaps, with different versions for OS variations and display scaling factors. Now they’re a vector format (SVG), allowing a single source file to be be rendered within Firefox at different sizes or with different colors. You won’t notice this change, because we’re currently using SVG versions of the current pre-Photon icons. We’ll switch to the final Photon icons later, for Firefox 57. Another big foundational piece of work landed in bug 1352364, which refactored our toolbar button CSS so that we can easily update it for Photon.

Onboarding: The onboarding work got started later than other parts of Photon. So while some prototyping has started, most of the work up to May was spent finalizing the scope and design of project.

Performance: As noted in Ehsan’s Quantum updates, the Photon performance work has already resulted in a significant improvement to Firefox startup time. Other notable fixes have made closing tabs faster, and work to improve how favicons are stored improved performance on our Tp5 page-load benchmark by 30%! Other fixes have reduced awesomebar jank. While a number of performance bugs have been fixed (of which these are just a subset), most of the focus so far has been on profiling Firefox to identify lots of other things to fix. And it’s also worth noting the great Performance Best Practices guide Mike Conley helped put together, as well as his Oh No! Reflow! add-on, which is a useful tool for finding synchronous reflows in Firefox UI (which cause jank).

That’s it for now! The next couple of these Photon updates will catch up with what’s currently underway.